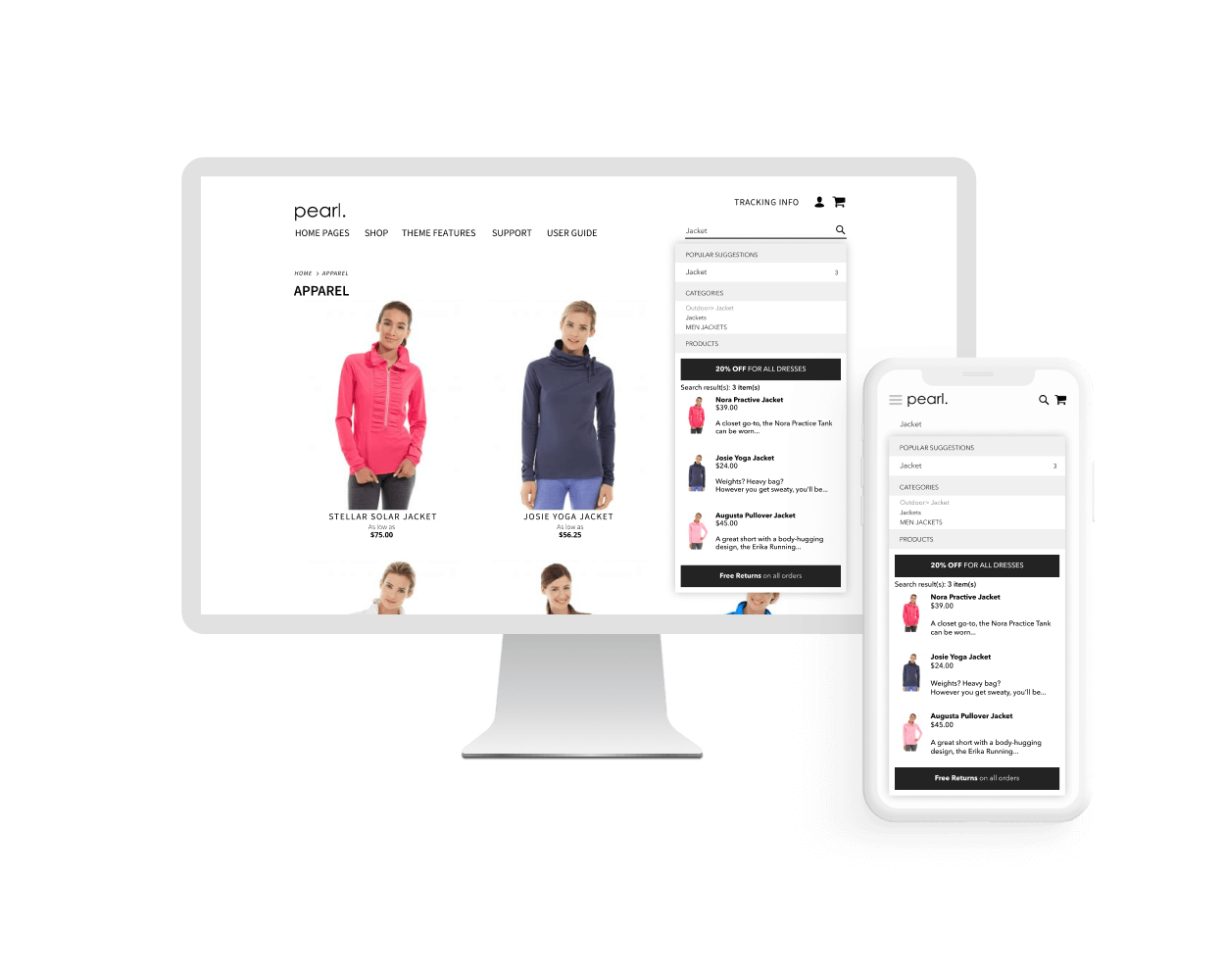 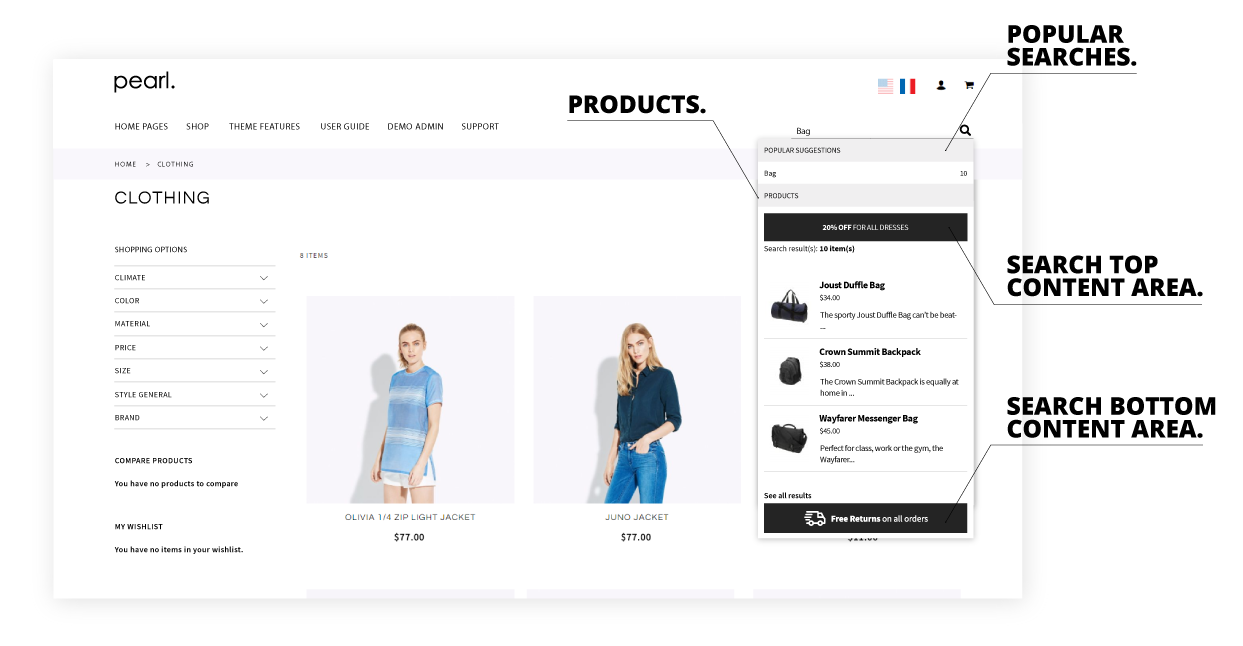 Search Autocomplete is fully integrated into Pearl with a fresh new design. (Pearl Only) 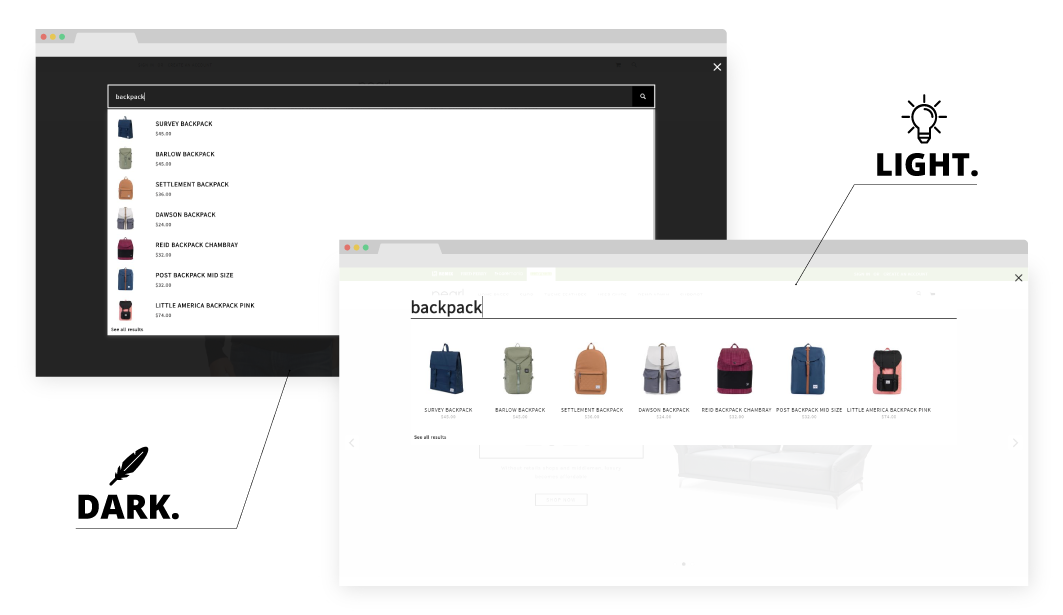 Why is this important? how does it help?

This Magento 2 search autocomplete extension helps customers find the right products so you can reduce friction and increase conversion!

Customers can only purchase the products they need and want if they can find them! If your customers can’t quickly find the right products they are likely to leave and shop somewhere else. Don’t let bad store search ruin the user experience.

Did you know that search can reach a usage rate of more than 60%? Also, those same customers using search have a 2x to 3x higher conversion rate. If you’d like to test your own stats, look no further than your Google Analytics account. Behavior > Site Search > Search Terms. We think you’ll agree that your Magento store needs a great extension.

The site search process is an important feature to evaluate and improve! Effective sites guide customers as they are typing and re-formulating their search queries. These as-you-type search suggestions are here to help users save time by finding and correcting misspells.

Autocomplete takes the autosuggest feature even further - enhancing the experience by visually displaying the most relevant products and pages. This reduces friction and takes the customer directly to the page they are looking for.

If you're the proud owner of our Pearl Theme, you can change the design of the Search Results Box to a more integrated, intuitive one. It can be customized to fit your store's design aesthetic via Admin Options, however, most people just go for the Light and Dark designs.

Bring new life to your Searches.

With the Magento 2 Ajax Search Autocomplete extension, you'll be able to display Popular Searches, Categories and Products in the Search Results. Moreover, the extension will also allow you to add blocks to the top and bottom of the Search Results Box, so you can display and advertise relevant content to your customers.

How does it help?

Why is this important?

How to Configure Ajax Search Autocomplete in Magento?

How to Configure Frontend Settings for Ajax Search Autocomplete in Magento?